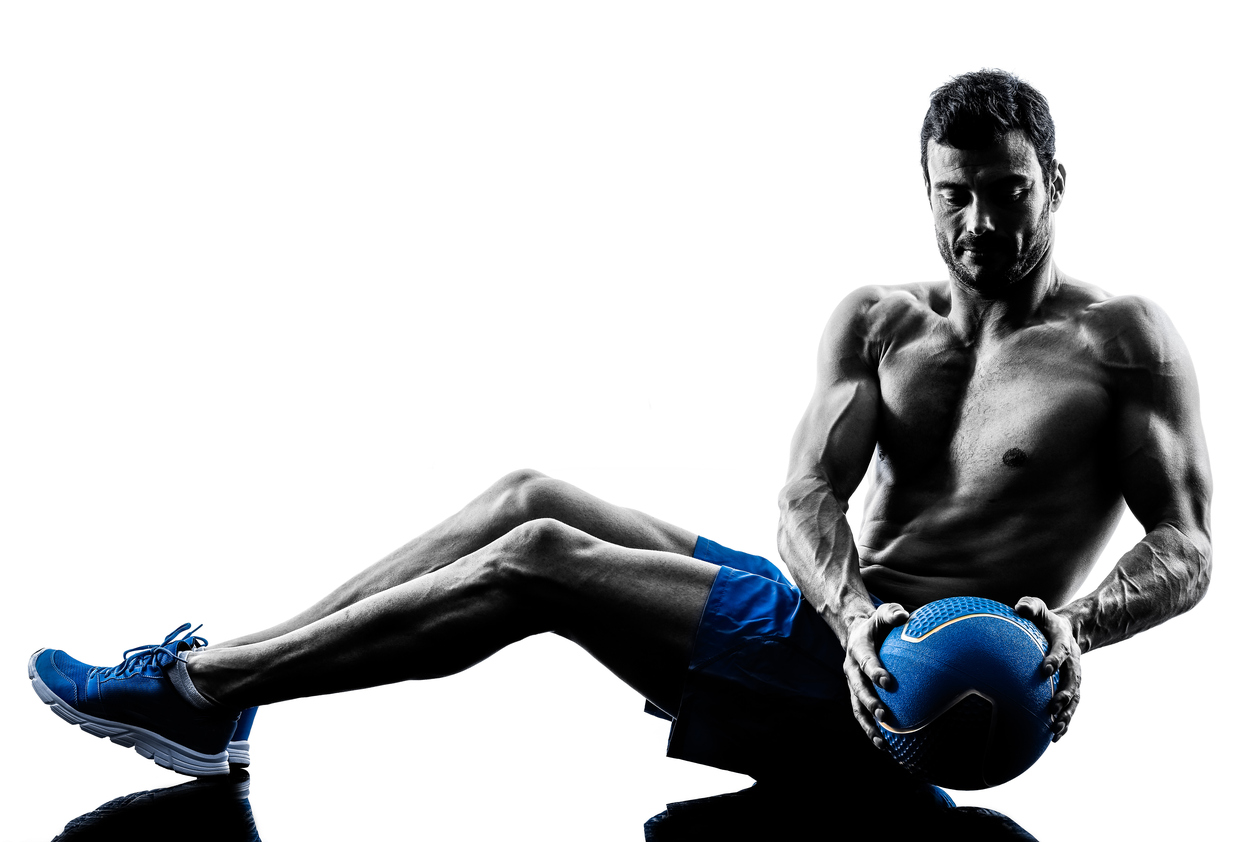 Too often I see people doing stuff in the gym which has the potential to be physical self-abuse, so I’d like to use this blog to help people avoid exercises which can break them down. Let’s start by getting the word out about a very common core* training exercise called seated Russian twists (SRT), like in the headline photo above (also performed with feet off the ground).

You should avoid the SRT because it poses a substantial risk to the health of your lumbar spine; enough risk that you will never get the risk/benefit to pencil out in your favor – particularly so if you are over-50, a senior, or have ever had a previous bout of low back pain (LBP).  The “seated” in SRT is a key word. If you stop reading right here, your main take away should be to avoid doing fitness stuff, particularly core work, in the seated position!

The SRT creates a range of stressful conditions to your low back which can deteriorate vulnerable spinal structures, so it’s a bit surprising the internet is not full of negative articles authored by chiropractors, spinal orthopedists and physical therapists. I did find a Men’s Health article and an excellent article on the Spinal Research Foundation website which calls the SRT a “herniation-maker” (as in “blowing out” your spinal discs).

You may know LBP is the number one cause of pain and disability in the US today, but perhaps aren’t aware that repeated, cumulative, “chronic” micro trauma is a leading factor in the genesis of LBP. Many people have a vague understanding of “blowing out” a spinal disc, but aren’t really sure what that entails. The spinal discs – shock absorbing “spacers” for the bony spine – are like jelly-filled sacks with a fibrous outer layer that holds things together.  “Blowing out” a spinal disc is usually a gradual process because the disc outer layer breaks down little-by-little due to the chronic trauma mentioned above. The outer layer most often breaks down to the rear/side of the disc – termed posterior/lateral – so any activity, position or movement that places lots of stress on posterior/lateral disc structures, like the SRT, will be a dangerous source of chronic trauma and hasten disc breakdown, pain and disability.

In our society, likely the most common source of chronic cumulative low back trauma (i.e., physical self-abuse) is the constant and prolonged amount of time we spend in the seated position – particularly a seated position with poor posture and spinal alignment where the low back sags toward the rear into a position called spinal flexion.

In contrast, the healthiest spinal alignment, with the least amount of stress, is generally a position where the discs/vertebrae are bent neither too far forward nor backward, a position termed “neutral spine” where the natural gradual curves of the spine are respected and maintained. If you have to sit, subject your spine to a load, or do anything functional, then neutral spine is the safest position which minimizes stress and trauma to the low back.

The spine can normally withstand a fair amount of stress; indeed the spine needs to be subjected to varied stimuli/forces/stresses to stay healthy. However, problems come from chronically repeated body positions, movements or actions – like the SRT – which place stressful forces** on spinal structures, particularly the posterior/lateral disc structures.

I’ve previously posted about the dangers and problems of the sitting position. In fact, as you’ve read at the top of this post, I always strongly emphasize we just shouldn’t do fitness-type stuff in the sitting position – it’s an un-functional position to train in for other life activities, it reduces the influence of hips and other important spinal support structures and we already spend way too much time in that position.

So, clearly, the first problem with the SRT is its seated position, but that’s just the start of the SRT’s problems. The SRT is more stressful to our spine than a normal seated position because: 1) your hips are further in front of your chest/shoulders which makes it much harder to maintain a neutral spine and increases shearing and compression forces; 2) you’re holding a weight which increases shearing and compression forces further and makes it harder still to maintain optimal spinal alignment; 3) you’re twisting from side to side which increases potentially destructive torsional forces on the discs outer layers; 4) the longer you hold the position, the more fatigued you become, making it more likely  you will have poorer spinal alignment the more reps/sets you do and the more work you’ve done before you get to the SRT in your workout.

Many spinal experts warn that the riskiest actions for the low spine combine dynamic movements of flexion/rotation with a load – exactly like the SRT – and that’s why it’s been called the “herniation maker” by the Spinal Research Foundation. I would add that the SRT probably has a couple more strikes against it (multiplies the risks of spinal tissue failure) due to the extra compression forces of being in a seated position and the fact that the big muscles of the hips are off-line (not actively engaged to help support the low back) because of the seated position.

If you have to twist your spine under load, it’s always safer to have the active support of your hips, which are the “best friends” of your low back. And, although it’s theoretically possible to perform the SRT with good spinal alignment, the leaned-back seated position, extra resistance, abdominal contraction and accumulating fatigue all conspires to make good neutral alignment difficult, if not impossible, for most people – it’s just so easy to sag back into spinal flexion with the SRT. Check out the headline photo again: because of the viewing angle, we can only guess about the alignment of the low back, but it’s clear that the model’s mid/upper spine is sagging into flexion.

If you’ve read to this point, I hope you are asking yourself: What benefits am I getting from the SRT that I can’t get somewhere else with much less risk to my spine? The answer is absolutely none! The risks of the SRT are always going to greatly outweigh the benefits; plus you’re in the very un-functional seated position which we already spend way too much time in. So, I strongly urge you to get off your butt and find a better position perform all your core work! Your body will thank you and the bonus is you will obtain much better functional carry-over for all your other life activities as well.

*”The core” is the mid-section of the body – pelvis/hips to shoulders – for more on the core see my previous posts here and here.

** Stressful forces on the spine can include: 1) a “compression force” which comes from above/below to smash a disc like you would smash a hamburger patty with a spatula and which can increase intra-disc pressures substantially; 2) a “torsional or rotational force” which twists spinal structures and can break down the disc’s fibrous outer layer and also makes the disc more vulnerable to compression forces; 3) a “shearing force” which cuts sideways through spinal structures and can break down spinal ligaments and facet joints and increase the damage caused by compression and torsional forces.