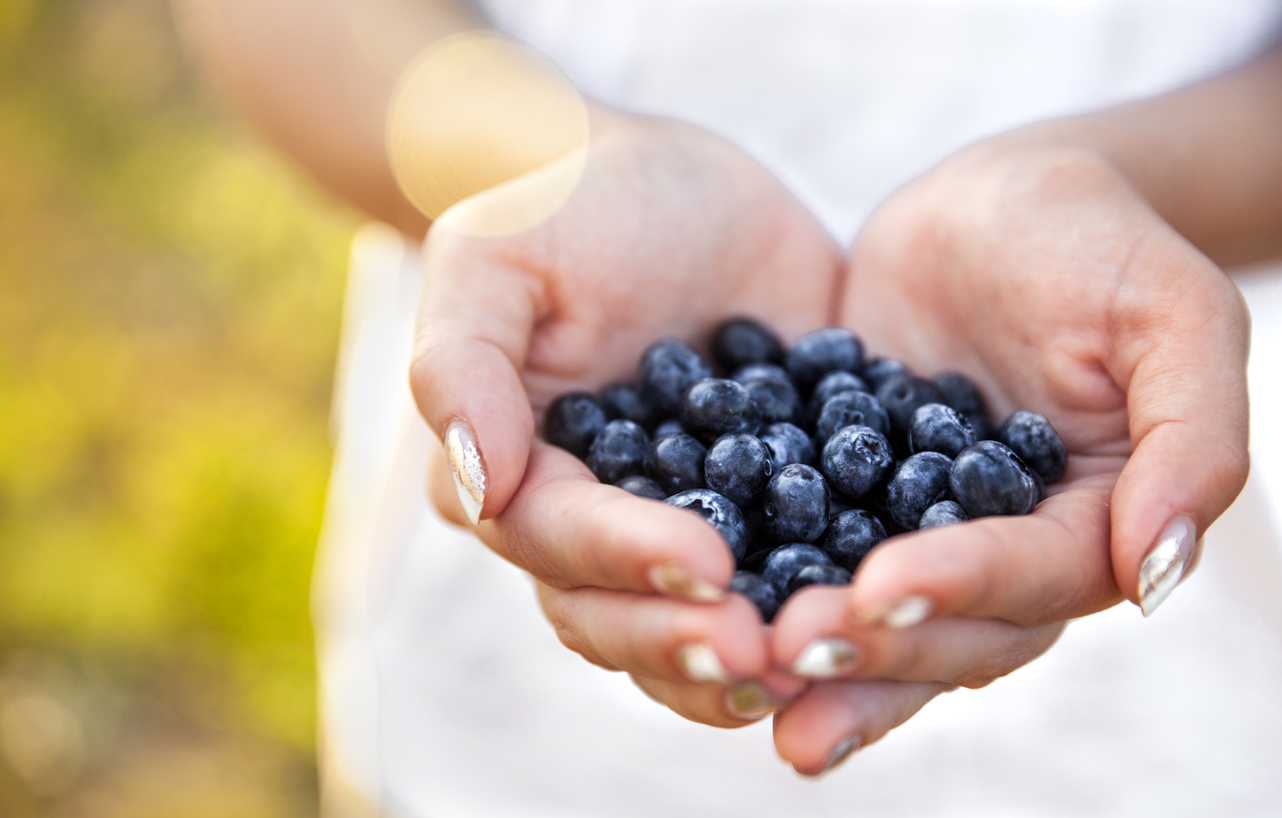 This video, which led me to this interesting study, inspired this blog post on blueberries. As a fitness trainer who specializes in working with over-50/seniors, I found it remarkable that the functional mobility of older adults could be improved in six weeks with the daily consumption of blueberries. No exercise, drugs or supplements; just add blueberries and people moved better! It’s doubtful I could equal those results with older adults on, say, a once-per-week training schedule (I typically see clients 1 to 3 times per week).

Currently, it’s popular to attribute “super food” status to certain foods and, indeed, there is good justification for this practice for many whole plant foods. If you compare foods by nutrient density – nutrients per calorie – as Dr. Joel Fuhrman does with his ANDI scores**, it’s quite clear that plant foods are nutritional super stars when compared to animal products.

“Super food” status is now becoming sub-categorized as we’re seeing some fruits referred to as “super fruits”. Blueberries are often mentioned as a “super fruit” candidate and with quick positive effects like the above study it’s no wonder why. So let’s dig a little deeper into blueberries***.

It turns out that blueberries are one of the more well-studied fruits – which is no accident – as this interesting Atlantic article written by an MD journalist explains. The article brings some broader perspective and leads me to this observation: most whole plant foods are absolutely loaded with phytonutrients and probably have equal or greater positive effects on our body, we just don’t know all of them yet since most plant foods have not been as well-studied as blueberries.

In his excellent book, Whole, Dr. T. Colin Campbell explains that science/medicine, nutrition and, indeed our whole culture, are deeply reductionist. In the case of nutritional science, that means trying to dig into the component compounds of plant foods. So you can see why it’s quite popular to say blueberries are beneficial due to the deeply pigmented polyphenols called anthocyanins they contain. And it’s also popular to point out that blueberries have an extremely high antioxidant capacity, since reductionist nutritional science has verified this fact.

But anthocyanins and antioxidant capacity don’t completely explain the “super” within blueberries or indeed any plant food. The point that often gets lost in our reductionist culture is it’s the intact whole food you should focus on instead of trying to cherry-pick the active ingredients or biologic actions of blueberries or any other plant food. It’s particularly dubious to think you can get the same positive effects of whole blueberries with, say, an anti-oxidant or polyphenol supplement, for example, although the supplement companies would like us to think so.

Barbara Shukitt-Hale, who has been studying blueberries for twenty years, says this in the Atlantic article I linked to above: “I’m a proponent of eating whole foods. There’s something about the food matrix in the whole blueberry that I can’t really explain, but it seems like all of it is important. We found [blueberries] doing a lot besides anti-oxidation. [Blueberries] are also anti-inflammatory. [Blueberries] also have direct effects on the brain…and neuronal communication; they’re involved in the formation of new neurons. [Blueberries] have far-reaching effects.”

A partial list of some of the known positive health effects of blueberries are below:

2) Reducing damage to DNA, a possible cancer cause and a factor in aging

3) Reducing oxidized cholesterol, a step in the atherosclerotic process that leads to heart disease

For more info, I would highly recommend going to Dr. Michael Greger’s site, NutritionFacts.org, and watching these informative videos on blueberries. If you want all of the health benefits of blueberries, don’t overlook his videos on why it’s not a good idea to eat blueberries with dairy products.

Also, this Healthline article has a good summary of some of blueberries’ positive effects.

And, lastly, definitely eat plenty of blueberries, but don’t forget they probably aren’t that special in the plant kingdom. It’s highly likely many plant foods are blueberries’ equal for positive health effects – in fact many plant foods probably surpass blueberries.  So don’t try to micro-manage your nutrition one-food-at-a-time, just follow a WFPB approach and eat a wide variety of plant foods and the natural synergy of literally thousands of phytonutrients will be working for you 24/7/365.

*Phytonutrients or phytochemicals are beneficial chemical compounds found only in plants. Although reductionist nutritional science has “discovered” a few thousand, it’s very likely many thousands more are yet to be discovered. The health benefits of phytonutrients are accessed when we eat the whole plant matrix, not as isolated individual chemicals or supplements.

**The ANDI scores (Aggregate Nutrient Density Index) rank foods by nutrient density with scores ranging from 0 (sugar) to 1000 (several different leafy greens). Dr. Fuhrman’s ANDI scores are different from most other nutrient density rankings because they include some of the known phytonutrients (beneficial chemicals unique to plants) in addition to the usual macronutrients, vitamins, minerals and fiber. A complete ANDI list is contained in Dr. Fuhrman’s Nutritarian Handbook & ANDI Food Scoring Guide available for purchase on his website.  Note the link in paragraph three above is only a short partial list of some common foods.

THE BEST $15 YOU’LL SPEND THIS MONTH

If you read my blog, you know I’m an advocate of a whole food, plant-based…