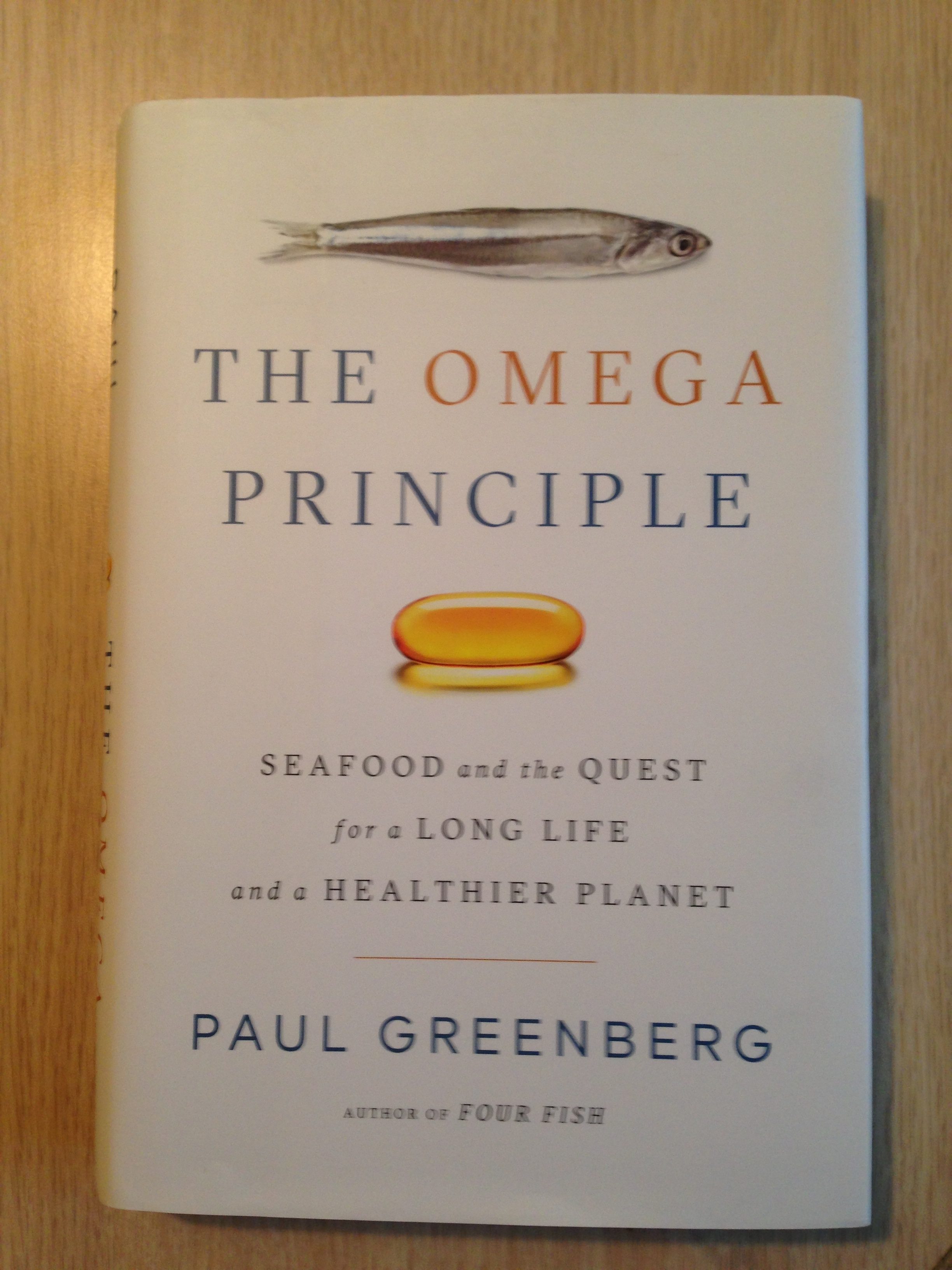 I’ve taken fish oil supplements – omega-3s – for years now and as the second most popular supplement in a 2017 ConsumerLab.com survey, it’s clear I’m not alone. Since 2012, though, some negative study results have caused omega-3s to lose some of their luster, particularly as a supplement to improve cardiovascular health. So I looked forward to updating my knowledge by reading the recently released The Omega Principle (TOP), by Paul Greenberg, who has written two previous books on seafood, aquaculture and ocean issues.

My read was quite informative in a more wide-ranging way than expected, so I highly recommend you read this well-written book. TOP is more than a book about a nutritional supplement, although it will certainly get you thinking about omega-3s and your health. TOP is also a book about ecology and will expand your awareness about the interrelationships between industrialized farming, animal husbandry practices, the fish reduction industry and the health of our oceans and planet.

Mr. Greenberg covers a lot of ground in 250 pages, but here are a few important ideas you might want to learn more about by reading the book:

3) If you don’t eat fish/seafood, consider a modest and sustainably sourced omega-3 supplement, but that’s probably not nearly as important as eating a plant-based diet full of veggies/greens/fruits/nuts

4) If you don’t take statins, an omega-3 supplement may improve your cardiovascular health, but probably not as much as exercising regularly and eating a Pesca-terranean diet full of veggies/greens/fruits/nuts/whole grains

6) Look for results from the REDUCE-IT, STRENGTH, ASCEND and, if you don’t take statins, particularly the VITAL studies to help guide your thinking about omega-3s and cardiovascular health; results from these large randomized controlled trials (RCT) are coming due shortly

Update: Results from the ASCEND trial have been published (Bhatt, NEJM, 2018), and show a 25% reduction in major cardiovascular events with subjects who were statin-treated and had high triglycerides and other cardiovascular risk factors. The dose of fish oil was 4 grams per day of Vascepa, a highly concentrated EPA-only fish oil preparation available by prescription.

In a NY Times article, Dr. JoAnn Manson, the lead author of VITAL, was quoted as saying the 28% reduction in heart attacks was ” pretty amazing. That’s what you see with statins”.

I’ve never thought much about the methods used to obtain our fish oil supplements, but it turns out there is a whole reduction industry which harvests 54 billion pounds of ocean life, representing 25% of all fish caught, and reduces it down to fertilizer, animal feed and omega-3 supplements. Mr. Greenberg covers the history and practices of this industry in an eye-opening manner and details how the reduction industry is not sustainable and has caused the elimination of one forage fish after another to the detriment of “food fish”, cetacean species, and the whole ecology of marine life.

Mr. Greenberg advocates utilizing more sustainable sources for omega-3 supplements, like algae, which are the foundation of the ocean’s omega-3 food chain anyway, so we’re just eliminating the “middle fish”, so to speak.

He also suggests the reduction industry needs to “transition from the direct harvest of wild animals to reprocessing by-products of fish offal”; meaning omega-3s can be sustainably gleaned from the discards of “food fish” to allow the forage fish to repopulate, which will have a positive effect on larger “food fish” species. “Food fish” are also more likely to be refrigerated and better taken care of, so the fragile omega-3 oils will be better protected from spoilage – rancid (oxidized) omega-3s are a health risk, not a health enhancer, and are the most vulnerable to oxidation of any fats.

OUR NEED FOR OMEGA-3s

Mr. Greenberg emphasizes that “omega-3s are a necessary part of the human diet and an integral part of the nervous system”. Omega-3s also help with controlling inflammation, which has been implicated in the genesis and progression of modern “life-style” degenerative diseases. Medical recommendations for daily intake of omega-3s from fish/seafood or supplements range from as little as 250mg/day to over 2 grams/day with 500mg/day an amount often encountered.

Mr. Greenberg covers the omega-3/omega-6 ratio concept first popularized by the Greek cardiologist, Dr. Artemis Simopoulos, which posits we need close to a one-to-one ratio of omega-3s to omega-6s to maintain optimal health.

The book also covers the Mediterranean diet, from the pioneering work of Dr. Ancel Keys in the 1960s, to more contemporary experts like Dr. Walter Willet. The Mediterranean diet is a low-animal-protein, mostly plant-based diet which has close to a 1:1 omega-3/omega-6 ratio and is considered by many to have the most scientific support as the candidate for the healthiest eating pattern possible.

Mr. Greenberg suggests omega-3 supplementation may have evolved as an attempt to “balance out our bad (dietary) behaviors” i.e., the SAD. As a fitness trainer, I’m familiar with this phenomenon, as I constantly run up against the patently false notion that exercise can somehow balance out bad dietary behaviors.

Mr. Greenberg argues we should move to a Mediterranean-type diet with limited animal protein (a few small servings per month), high amounts of vegetables/greens/fruit/whole grains and, most crucially, that the animal protein should come from marine sources like small forage fish, mussels and other farmed bivalves; a diet he terms a Pesca-terranean diet. I would agree with Mr. Greenberg, as I believe a whole food, plant-based eating pattern is the best health promoting behavior available to us; see here, here, here and here for my posts on plant-based eating.

THE SCIENCE OF OMEGA-3s AND CARDIOVASCULAR HEALTH

Heart disease kills 610,000 people per year in the U.S. and, importantly, Mr. Greenberg reminds us that “sudden cardiac death is the largest cause of natural mortality in the U.S.” and “that half of all patients first report heart disease to their doctors by dropping dead…Just fibrillation followed by abrupt (cardiac) arrest”.

He emphasizes that omega-3s are “some of the most studied organic molecules on earth” with over 30,000 studies published.

He notes that there is consistent evidence for an association between “high omega-3 blood lipid levels and lower rates of fatal coronary heart disease”.

The book outlines the difference between observational studies which draw associations, randomized controlled trials (RCT) which can help draw firmer conclusions and the modern meta-analysis, which is a data analysis of previously published studies which are aggregated together. Meta-analysis studies cost much less and have the potential to increase the power of studies, because a large number of subjects are pooled together for analysis, but meta-analysis also leave room for biased results since study authors can pick and choose which studies get included or excluded and how the data is statistically analyzed.

Mr. Greenberg discusses the favorable results from observational and RCT studies from the 1980s & 90s and contrasts them with the more recent negative meta-analysis and RCT studies of the last 5-6 years and offers possible reasons for the differing results.

Of real interest is his assertion that statins are a confounding factor in more modern RCT studies and that the early positive studies were performed with subjects who were not treated with statins.

Another possible confounding factor affecting studies is omega-3 blood lipid levels; which are rarely measured, so it’s possible control subjects could already have reached a possible threshold for protection from omega-3s which would skew results in the negative direction.

Perhaps most interesting was TOP’s treatment of the original 2012 meta-analysis, which initiated the recent negative trend for omega-3/cardiovascular disease research. Mr. Greenberg shares a re-analysis of the study data/design by two different statisticians. These biostatisticians note biases in the study design and the methodology to determine statistical significance: with a meta-analysis study, the authors choose the inclusion criteria (which studies get included and which excluded from consideration) and how to determine statistical significance. Re-analysis of the study data shows a 1% reduction in cardiac death – which doesn’t sound particularly significant until you consider in the U.S. that’s over 6,000 people per year saved from a death from heart disease just by taking a daily omega-3s supplement.

Mr. Greenberg also points out not all studies in the last 6 years have been negative. A 2016 meta-analysis, with 5x the number of subjects and a much longer time frame than the 2012 study above, showed a 6% decrease in all-cause mortality.

Lastly, Greenberg reminds us that the results of several large omega-3 RCTs are expected in the next couple of years. Look for results from REDUCE-IT, STRENGTH, VITAL, and ACSEND to help update and refine your thinking about omega-3 supplementation and cardiovascular health.

This is my third and final post on whole foods, plant-based eating/nutrition – read my…