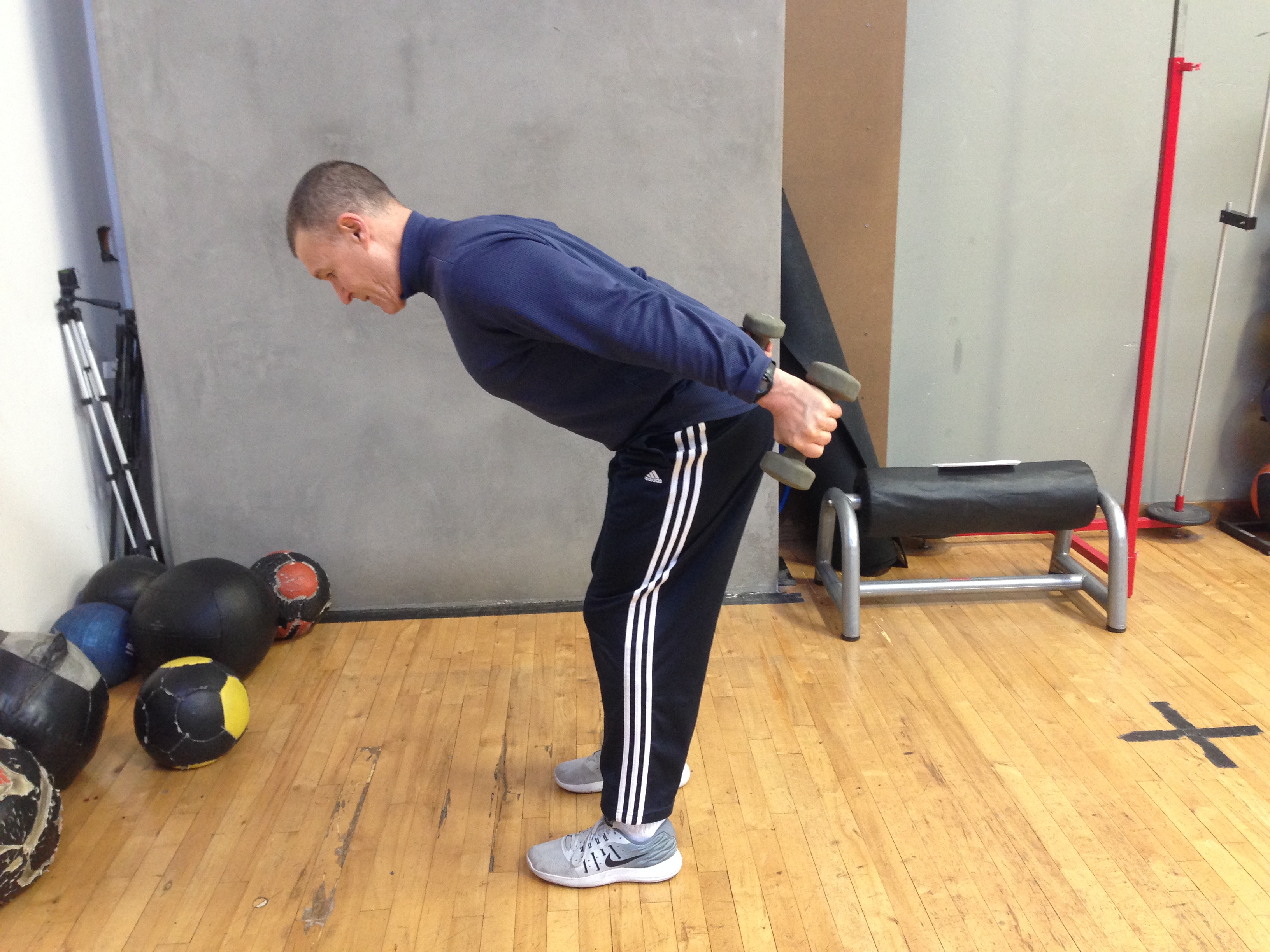 For an audience of over-50 adults and seniors – my client group – I should post about topics more important than the resistance-training exercise called Dumbbell Triceps Kickback (DTK). My excuse is I’m human: I see DTK performed almost every day, which is depressing since it’s such a worthless exercise. It would be great if everyone knew better, so maybe this post will help. Plus, as a group, I think seniors would be better off not doing any narrowly focused one-joint exercises like DTK.

DTK probably date from the 1950’s, but they’re definitely not an oldie-but-goody; more of a poorly chosen holdover from a reductionist body building paradigm which seeks to “isolate” one muscle group at a time. In general, a modern function-based approach would look to create resistance exercises based on whole-body movements rather than specific, individual muscles. There are a few variations of the DTK *, but what they all have in common is the torso/upper arm stays stabilized more or less parallel to the ground while the lower arm moves in a circular path at the elbow – here’s a quick video.

What’s so bad about the DTK? First, if you’re an over-50/senior, you have much more important priorities than performing narrowly focused single joint/muscle exercises (see #3 just below). Second, it’s hard enough for most of us to get into the gym, so I’d like to help exercisers to not inadvertently waste time – and the DTK is a profound time waster. Third, it’s discouraging that, as a profession, we aren’t advancing the knowledge of exercise science. Nearly thirty years ago I learned the DTK doesn’t make biomechanical sense, yet it seems more popular today than ever. If you Google the DTK, you will find many listings, but very few have any kind of negative/ critical headline warning people off (here is one exception); which is sad since no one should consider the DTK a valid exercise idea.

When I ponder why the DTK has persisted, perhaps people like me should accept some blame for not getting the word out loudly enough – hence the motivation for this post. My four essential take-home points are in the next section, DTK: THE BOTTOM LINE, so that’s really all you need, particularly if you are a senior. But if you want to dig a little deeper, I cover that in the section WHY IS THE DTK SUCH AN INEFFECTIVE EXERCISE?

1) The DTK is the Time Waster of the Month because there is a complete resistance/triceps strength mismatch throughout the DTK’s circular exercise motion. The mechanics & kinesiology** are such that you would literally need to stand on your head to make the DTK into a worthwhile exercise for your triceps!

2) The DTK is so worthless that just about any other triceps exercise will produce better results. However, for over-50 and senior adults it’s best to skip dedicated “triceps” exercises anyway as your time is much better spent on other priorities (see #3) and also note that a couple of specific “triceps” exercises could have more risk than benefit (see #4).

3) If you’re over-50 or, especially, a senior, I suggest you minimize or eliminate all narrow focused single joint exercises like the DTK. Assuming you use body-respecting technique and can modify (scale) to your physical capabilities, your time and energy is much better spent doing multi-joint, large muscle group exercises like pushing and pulling movements for the upper body and functional feet-on-the-ground lower-body exercises like squats, dead lifts, split squats and step ups. These are by far the most productive and functional exercises for your time and energy expended. 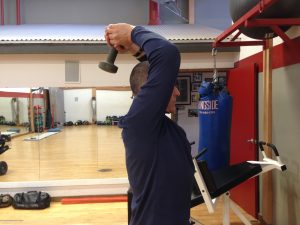 4) If you’re an over-50/senior and feel you’ve just got to perform a dedicated triceps exercise, it would be a good idea to exclude: a) arms overhead triceps extensions and b) bench dips. These two exercises require healthy/supple shoulders to perform properly and to minimize injury risk. The older you are the more likely your shoulders aren’t perfect, so the greater the injury risk with these exercises; especially bench dips, which put extreme stress on the front shoulder tissues.

WHY IS THE DTK SUCH AN INEFFECTIVE EXERCISE?

I sum up all the factors that make the DTK such a futile activity in point #6 below. Points #1 through #5 provide the necessary background to fully appreciate point #6.

1) You utilize gravity for resistance when you use a barbell/dumbbell. Gravity’s direction of resistance (or pull) is only in the vertical up and down direction. With the DTK, your hand/dumbbell is moving in a circular motion, so some motion is vertical and some is horizontal. The vertical motion allows the full effect of gravity to oppose the movement, while the horizontal motion allows only a “glancing” effect of gravity. With the DTK, the weight of the dumbbell obviously doesn’t change, but the actual resistance to the lower arm’s circular motion will decrease as you move in a non-vertical direction and increase as you move in the vertical direction.  Depending on the specific exercise, this “variable” resistance with a circular path can be good, bad or neutral – it depends on how the changing resistance opposes or matches up with the strength expression capabilities of the muscles involved – and with the DTK it’s a profoundly poor matchup (see #6).

2) When you perform a single joint exercise like the DTK (elbow joint hinging), the ability of the muscles involved to express strength changes with the angle of the joint. In other words, you are stronger or weaker whether your arm is straighter or more bent; or pictured another way, whether the upper and lower arm are closer or farther away from each other. With the DTK, you are stronger through the middle of the motion with your arm/elbow bent at about 90 degrees and relatively weaker at the two ends – with your hand near your shoulder or your arm straight. The particular strength expression of the DTK matches up abysmally with the changing resistance effect of gravity to create a very, very ineffective exercise – see #6.

3) Applying point #2 above to a broader view, the ability to express strength at the hand will change as you move through single joint circular movements like bicep curls, DTK, triceps extensions, shoulder lateral raises or front raises and pectoral butterflies – you’re not uniformly “strong” through the whole movement – your strength changes throughout the movement arc. This changing strength expression is well-known and studied in exercise science and is represented graphically as a “strength curve”.

4) The “strength curve” is not a new concept – it was the design basis for Nautilus variable resistance machines, first developed in the 70’s, which use an asymmetrical resistance cam (shaped like the profile of a chambered nautilus sea shell) to change the resistance applied throughout circular (they called it rotary) movements because the strength expression capability changes throughout the movement arc.

5) Some exercises happen to match up well the change in gravity’s actual resistance with the strength curve (strength expression capabilities) of the muscles involved. Take a standing bicep curl for example. With your arm straight at your side – the beginning of the curl – you are relatively weak and, helpfully, gravity doesn’t provide much resistance because your arm first moves horizontally; then as you get to about 90 degrees of elbow flexion you become stronger and, fortuitously, gravity provides maximum resistance because your arm is moving vertically; farther along you again become weaker as your hand nears your shoulder and, kindly, resistance starts to fall away because your arm is again moving horizontally.

6) For the DTK, unlike curls, there is no resistance when you are strongest at about 90 degrees of elbow flexion because your lower arm is moving horizontally (and gravity is working vertically) and maximal resistance when you are weakest when your arm is straight because gravity is fully opposing the straightened elbow. This means there is a complete mismatch between resistance and strength expression though out the entire DTK motion.  In practice, what makes the DTK so ineffective is you can only use a dumbbell weight which the weakest point of the motion can handle to keep your arm straight; which means 95% of the motion has no challenge or stimulus to increase triceps strength – the triceps is just not worked hard enough (or even at all) for most of the movement. And it just goes from bad to ridiculously silly: for the first part of the motion when your hand is near your shoulder and you start to move it down and toward the ground, gravity actually provides an assist (helps) with the motion, turning the DTK at that point into a resisted bicep exercise like a curl. This is why the DTK is the Time Waster of the Month!  As I said above, to match up changing resistance to strength expression effectively for the DTK, you would literally need to stand on your head!

DTK WORK AROUND AND ALTERNATIVES 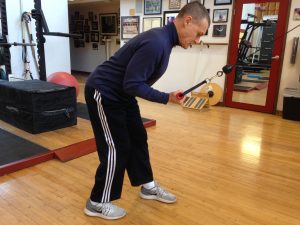 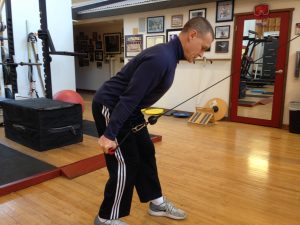 Cable exercise machines are nice because they allow you to re-direct the force of gravity so it opposes movement in other directions besides the vertical up and down. To perform the Triceps Kickback motion and not waste your time as per #6 above, use a cable/pulley apparatus and align the cable so it’s at 90 degrees with your hand when your arm is bent at 90 degrees at the elbow. With this arrangement, you will have maximal resistance applied when the triceps are strongest and minimal resistance when they are weakest.

If you need to use dumbbells and want to align your body so your arm movement creates an effective triceps exercise, face-up lying dumbbell triceps extensions (LDTE), commonly called “skull crackers”, are a good choice. A short video is here. The exercise is called a “skull cracker” because, if you use a barbell, it is moving right at your forehead as your elbow bends; but you eliminate this potential problem if you use dumbbells because they move on each side of your head through the arm flexed position. With LDTE, when your arm is straight (at its weakest) there is little resistance, but when your elbow is about 90 degrees (at its strongest) there is maximal resistance. Two caveats for successful and effective LDTE performance: 1) if you use a bench to lie on, you need to have the movement & body control skills to safely go back-and-forth from the sitting/lying position with dumbbells in your hands; and 2) you’ll need the shoulder strength to keep your upper arm stable at a 90 degree angle from your body.

If you have access to a cable machine, the tried-and-true standing triceps extension exercise is fine, but with a few  caveats: 1) you’ll need the abdominal strength to keep your torso stabilized; 2) you’ll need the shoulder/chest/upper back strength to keep your upper arm from moving; and 3) try not to use a rope attachment as too much of your muscular effort is needed to keep the rope stabilized at the hand/wrist, so less tension is developed in the triceps muscles.

* 1) standing with torso bent forward toward the ground; 2) with one hand and one knee on a bench; 3) lying face down on a bench; 4) I’ve even seen it performed on the ground from hands and knees.

**The science of human movement

START AT THE BEGINNING